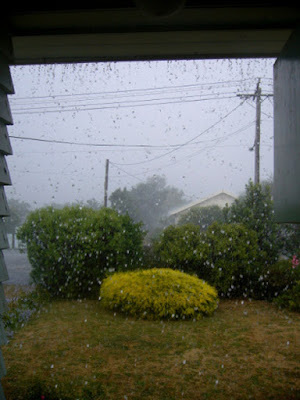 Hello all, it is a rainy Sunday here, I am itching to get into the garden  but it is sodden after 2 days of rain and the forecast has it raining till Thursday!  The cats are disgusted and are sitting on the door step waiting for it to clear, a long wait!  At least it is warm and I can keep the door open. 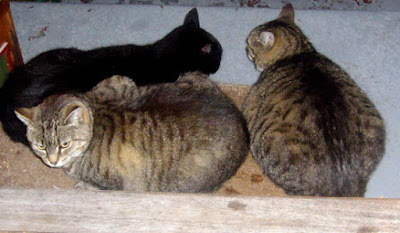 Looking on the bright side I won’t have to water it for a few days! 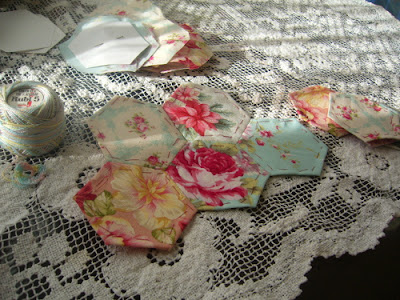 I haven’t been in the mood for crochet, but have picked up a long term project, some patchwork, long term, because it is being done by hand!  I am not sure what it will be yet, I just enjoy the activity.

There was a break in the rain at lunchtime for all of half an hour, Ambrose (the black cat) decided to wander off and got caught in the next downpour, it was so funny he tore inside when it eased off and mewed at me so plaintively, I had to pick him up in a towel and dry him he was soaked to the skin, poor boy, I sometimes thinks he gets wet purposely so he can be wrapped in a towel and get cuddled
.
It has been one of days where the kitchen is the nicest place to be. 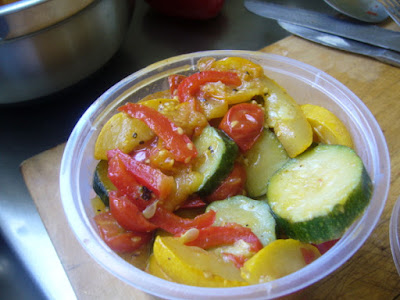 I have been freezing up punnets of lightly stewed tomatoes, zucchini and peppers ready for winter stews.  I have visitors coming next Tuesday and decided to do some baking for the occasion.  I made 2 slices, Eltham slice (a traditional kiwi bake), and a variation of it. Eltham slice usually has coconut and currants and spice and a coconut icing topping, but for the second one, instead of currants I used chocolate buttons and left the topping off. I will put the proper recipe up in the recipe page (see buttons under the header.) 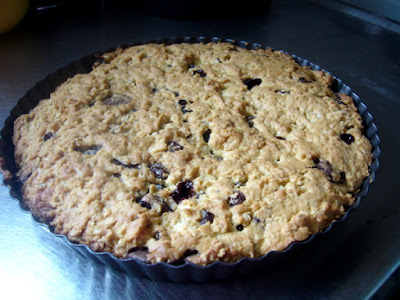 When I use the oven, I like to fill it up to save on power. So I decided use to some rhubarb I had picked between showers. I was going to make crumble for my dessert.  But I suddenly remembered a cake I had seen on someone’s blog that had spoonful’s of rhubarb and custard in the mix.  I searched for it but just could not remember where I had seen it as I hadn’t bookmarked it.  Then I had a brainwave why not make it as a pie! 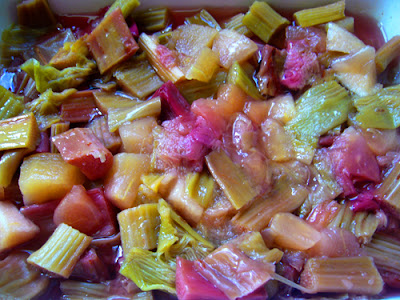 I was going to give the rhubarb a blast in the oven but suddenly thought why not the microwave, so I sprinkled sugar on the chopped up rhubarb covered with cling film (used no water) and cooked for 8 minutes at 50 per cent power.  It was a lot quicker than the oven

Next, I made some custard up, but you could use ready made, it needs to be fairly thick.

Then, I made some short crust pastry but quite short so that I could reserve some for the crumble topping.  I baked the pastry blind so it would have a soggy bottom.

Then I put spoonfuls of rhubarb and custard in the crust, I wanted there to be distinct patches of custard and rhubarb. 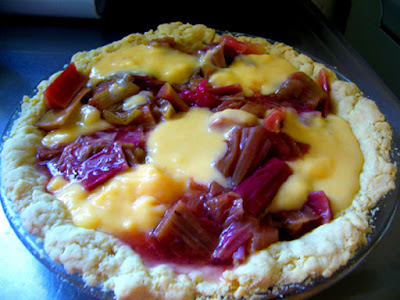 Then I scrunched up the reserved pastry added 2 spoons of brown sugar and I half tsp. ginger to the crumble.  Then I baked it in oven till the crumble was brown, I also used up the rest of the custard and rhubarb and crumble mix in little dishes. (I will probably share these with some elderly souls in our street) 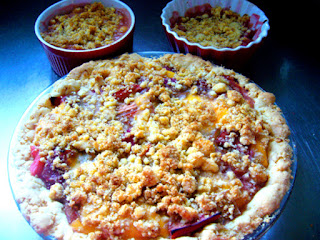 I will write the recipe up properly during the week and put it on my recipe page.  I imagine you could use any stewed fruit.  I tell you it was delicious with a spoonful of plain yoghurt. 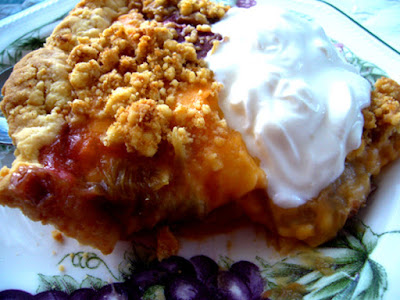 My poor diet has gone for a burton, sigh!  But at least I only had the stewed tomato, zucchini and peppers on toast as my main course.  (Who am I kidding, ha ha) and probably will only have a cup of soup for supper.

While I am off the diet wagon, I might as well have a proper afternoon tea treat. (Well, I have to try the new variation of Eltham Slice before giving it to guests!)  Also a chance to use one of the tea sets I got from the Hospice Op shop a couple of weeks ago. 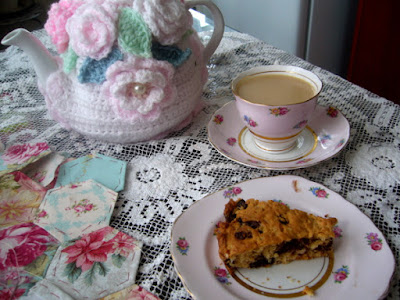 I think I have rambled on enough, so I will go and devour my tea and cake.  Hope you all have a lovely Sunday whenever it arrives for you, and yay I do believe the sun is coming out, well trying to!  I am hoping the weather forecasters have got it wrong again!

A bit later, it was delicious and the sun didn't come it it raining again, oh well, at least we are not having the flooding that the Auckland region is.

View my complete profile
Hi I am Sharon, I live in the Wairarapa, a province in the lower half of the North Island of New Zealand. I am now at a stage in my life where I have time to follow my passions, a new found one - crochet, and life long ones of gardening, cooking and art journalling and I have a passion for bags of all sorts. These I will share with you as I step out this new phase of my life. So welcome and enjoy!